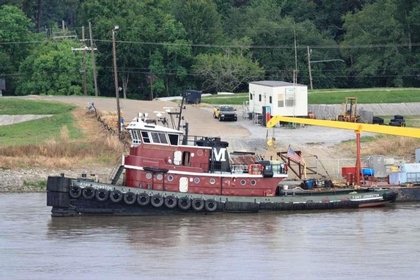 She was a Hisada class tug, delivered to the United States Navy on November 13th, 1945. Originally intended for World War II service in the Western Pacific. The Wabanquot was instead assigned to the 11th Naval District at San Diego, California. Due to the fact that the war had ended before her completion.

In 1947, she was transferred to the United States Atlantic Fleet, and was placed in reserve status with the 16th Fleet.

In 1948, Wabanquot was assigned to the 3rd Naval District, providing towing services and pilot assistance in New York City from 1948 to 1976.

In February of 1962, she was reclassified as a medium harbor tug and redesignated as the YTM-525. And in 1976, the tug was struck from the Navy list.

In 1976, the tug was acquired by the Cape Fear Towing Company of Wilmington, North Carolina. Where she was renamed as the Fort Johnston. The company then modernized the wheelhouse, and repowered the tug.

In 2007, the Cape Fear Towing Company was acquired by the Moran Towing Corporation of New Canaan, Connecticut where the tug retained her name.

In 2012, the tug was retired from service. Her current and or final disposition is unknown. She was a single screw tug, rated at 3,000 horsepower.
(NavSouce Online)