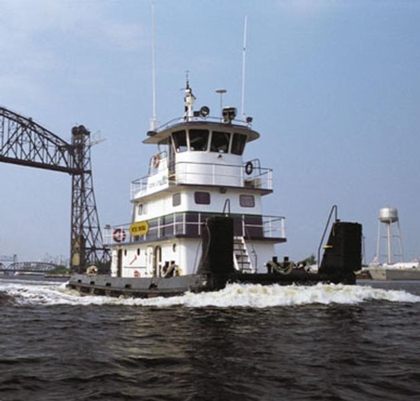 In 1976 the tug was acquired by C and R Towing and Fleeting Incorporated of Baton Rouge, Louisiana. Where she was renamed as the C & R No 1 .

She was later acquired by the Allied Transportation Company of Norfolk, Virginia. Where the tug was renamed as the Raven .

The tug was later acquired by the Vane Brothers Company of Baltimore, Maryland. Where she was renamed as the Mitzie Hughes.

Named for Karen "Mitzie" Greenwood Hughes. The Wife of Vane Brothers Company President C. Duff Hughes. The tug transported oil barges along the inter coastal waterways, and Chesapeake Bay. As well as the Ports of Virginia and Baltimore.

She is a twin screw, towboat, rated at 800 horsepower.


Back to CAPE ROMAIN CONTRACTORS INCORPORATED