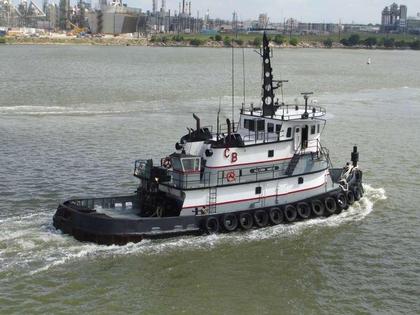 Pictured as: the Allison Marie (Crosby Marine) Photo by: Photo by: Captain Johann

Built in 1982, by Toups Welding Service of Larose, Louisiana (hull #2) as the Capt. Whitty for the Adams Marine Towing Company Incorporated of Morgan City, Louisiana.

In 2008, the tug was acquired by the Crosby Marine Transportation Company Incorporated of Golden Meadow, Louisiana. Where she was renamed as the Allison Marie.

Re powered in 2000, the tug was powered by two, Caterpillar 3412-C diesel engines. Turning two, fixed pitch propellers, mounted in kort nozzles, for a rated 3,000 horsepower.

Her electrical service is provided by two, 40kW generator sets. The tug's capacities are 40,000 gallons of fuel oil, and 11,500 gallons of potable water.

The tug's towing gear consisted of a Smatco 48K-DAD-75, double drum, side by side, anchor towing winch.