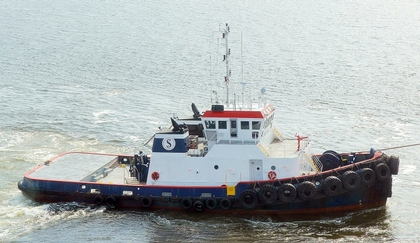 Built in 1995, by Halter Marine Services Incorporated of Lockport, Louisiana (hull #4167) as the Kinsman Condor for the Bay Transportation Company of Tampa, Florida.

In 1998, the Bay Transportation Company was acquired by Hvide Marine Incorporated of Fort Lauderdale, Florida.

In 2000, Hvide Marine Incorporated was acquired by Seabulk Towing Services Incorporated of Ft. Lauderdale, Florida. Where the tug was renamed as the Condor.

In 2022, the tug was chartered by McAllister Towing and Transportation of New York, New York. Where she retained her name.

Her electrical service is provided by two, 135kW generator sets. Driven by two, Caterpillar 3306 diesel engines. The tug's capacities are 96,000 gallons of fuel, 1,650 gallons of lube and hydraulic oil, and 12,000 gallons of potable water.


Back to BAY TRANSPORTATION COMPANY