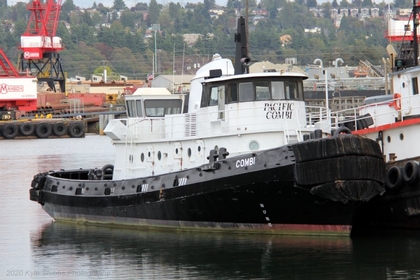 Built in 1967, by the Martinolich Shipbuilding Corporation of Tacoma, Washington (hull #378) as the San Pedro for the Wilmington Transportation Company of Los Angeles, California.

In 1994, the tug was reconfigured. Originally constructed as a single screw tug. She was outfitted with a forward mounted z drive unit to augment her existing single screw configuration. The retrofitted tug was dubbed a CombiTug. And, she was renamed as the Pacific Combi.

In 1998, the Wilmington Transportation Company was acquired by the Foss Maritime Company of Seattle, Washington. Where the tug retained her name.

In 1999, the tug was acquired by the American Navigation Company of San Francisco, California. Where she retained her name.

In 2005, the American Navigation Company was acquired by the Foss Maritime Company of Seattle, Washington. The company became AmNAV Maritime Services of Oakland, California. Where the tug retained her name.

In 2012, AmNAV Maritime Services was reabsorbed back into Foss Marine Holdings of Seattle, Washington. Where the tug retained her name.

In 2017, she was acquired by Salmon Bay Barge Line of Seattle, Washington. Where the tug was renamed as the Combi.