Built in 1978, by Main Iron Works Incorporated of Houma, Louisiana (hull #335) as the Jabbar for the McAllister Brothers Towing Company Incorporated of New York, New York.

The name Jabbar means "Powerful" in Arabic. Designed by Engineering staff at the McAllister Brothers Towing Company of New York, New York. Headed by Donald C. Hankin. With design criteria for the tug developed by Capt. E.C. Brown and Michael Stegenga of ARAMCO. Her propulsion systems and the Horton kort nozzles were designed by Clancy Horton of Wilton, Connecticut.

The tug was owned, and operated by International Tug Services. A joint venture company between McAllister Brothers Towing of New York, New York and the Arabian American Oil Company (Aramco) of Saudi Arabia in port of Ras Tanura. Prior to Aramco being acquired by the Saudi government in 1980.

In 2001, the tug was acquired by Awal Marine Services Incorporated of Manama, Bahrain. Where the tug retained her name. And, worked in the Arabian Gulf; Bombay High, India and offshore Croatia.

In 2013, the tug was acquired by the Tradewinds Towing Company of Saint Augustine, Florida. Where she was renamed as the Isabelle. Named for Isabelle Smith, the youngest daughter of owner, and operator Captain Dominique Smith.

The tug operates under Vanuatu registry. Performing coastwise, and ocean tows. Including project cargoes, marine salvage, rescue towage, as well as dredging and construction support within the Gulf of Mexico, Caribbean, and Central and South America.

Powered by two, EMD16-645E7B diesel engines. Turning two, fixed pitch, propellers, mounted in kort nozzles. The tug is fitted with two, flanking rudders forward of each propeller. In addition to the primary rudders. She is also outfitted with a bow thruster, for a rated 5,750 horsepower.

Her external firefighting is provided by a 5,000 Gallon Per Minute fire pump. Driven by a GM16V71 diesel engine, feeding a water/foam monitor. The tug's original bow fender system was conceived by ARAMCO and developed by Uniroyal and the McAllister Brothers Towing Company. Specifically for the vessel. The fendering is extruded, low friction rubber 16(in) by 16(in) by 4(ft) long. Molded around a steel plate with stainless steel bolts for fitting on the bow. This method was designed so bow fenders can be changed by the crew, and would not require shipyard, or crane service.
(Bob Beegle, Captain Brian Fournier, Captain Dominique Smith, Robert Mattsson) 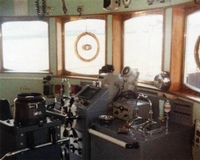 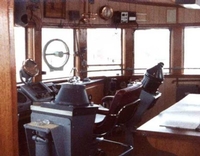 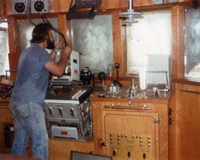 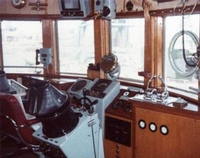 
Back to TRADEWINDS TOWING COMPANY