Built in 1972, by the Marinette Marine Corporation of Marinette, Wisconsin (hull #816) as the YTB-816 (Campti) for the United States Navy.

The tug was delivered to the United States Navy on December 22nd, 1972. She was allocated to the Naval Submarine Base at New London, Connecticut.

In 1985, she was re assigned to the Naval Amphibious Base at Little Creek Virginia, where she served until the tug was decommissioned in 1990.

On November 9th, 1999 she was stricken from the Naval Register. And, the tug was sold by Defense Reutilization and Marketing Service (DRMS) on the September 27th, 2000

In 2000, she was acquired Hartley Marine Services incorporated of Boothbay Harbor, Maine. Where the tug was renamed as the Seguin.

In 2013, Hartley Marine Services Incorporated was acquired by Winslow Marine Incorporated of Southport, Maine. Where the tug retained her name.

In 2014, the tug was acquired by Foreign Interests. However, the tug was abandoned by the new owners in Florida. Her current, and or final disposition is unknown.

In 2014, she was acquired by Harvard's Construction LLC. of Lucedale, Mississippi. Where she was renamed as the Laura Gail.

The tug's electrical service was provided by two, 110kw Delco AC generators. Her capacities were 29,946 gallons of fuel, 18.5 long tons of ballast, 2,463 gallons of potable water, and 500 gallons of lube oil.

Her towing gear consisted of an Almond Johnson 320 towing winch, mounted on her stern. Outfitted with 1,500(ft) of 1.5(in) galvanized steel wire wire. And, a 24(in) New England Trawler Electro Hydraulic capstan mounted on her bow.
(NavSource Online, Captain Pat Folan) 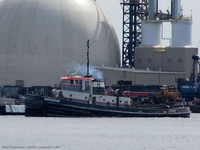