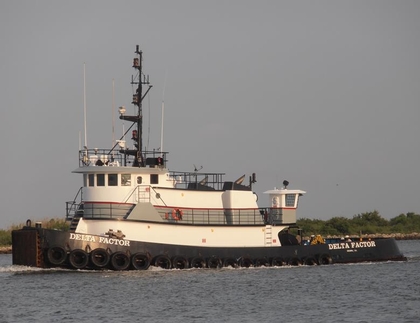 In 1987, the tug was acquired by G and B Marine Incorporated of Beaumont, Texas. Where she was renamed as the Alton C. Gambarella.

In 1999, she was acquired by Double Eagle Marine Incorporated of New Iberia, Louisiana. Where the tug was renamed as the Navajo Eagle.

In 2011, the tug was acquired by the Crosby Marine Transportation Company of Golden Meadow, Louisiana. Where she retained her name.

In 2021, she was phased out of active service and was "laid up" at Port Fourchon, Louisiana.

The tug's electrical service was provided by two, 50kW generator sets. Driven by two, GM 4-71 diesel engines. Her capacities were 47,092 gallons of fuel, 7,000 gallons of potable water, and 990 gallons of lube oil.


Back to GULF INTERNATIONAL MARINE INCORPORATED