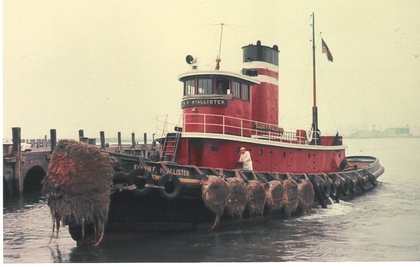 Built in 1904, by the Burlee Dry Dock Company of Port Richmond; Staten Island, New York as the Nanuet for the Erie Railroad Company of Jersey City, New Jersey.

In 1954, the tug was acquired by the McAllister Brothers Towing Company of New York, New York. Where she was renamed as the Ellen F. McAllister.

In 1973, she was acquired by Captain Arthur Fournier of the Penobscot Bay Towing Company of Belfast, Maine. Where she was renamed as the Ellen F.

Originally built as a steam tug. In 1956, she was dieselized to 1,080 horsepower by McAllister Towing. She was a single screw tug, rated at 1,080 horsepower. The tug's current and or final disposition is unknown.
(Captain Brian Fournier)


Back to ERIE RAILROAD COMPANY