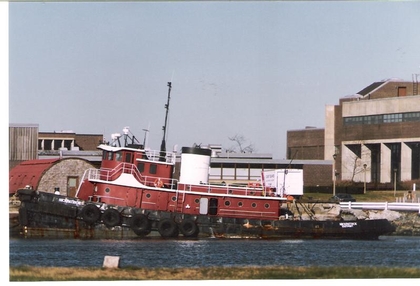 Pictured as: the Nickpatrick (Passamaquoddy) Photo by: Captain Brian Fournier

Built in 1951, by Levingston Shipyards of Orange, Texas (hull #466) as the Spindletop for the Magnolia Petroleum Company of Corsicana, Texas.

The company was founded on April 24th, 1911 as a consolidation of several earlier companies. The Standard Oil Company of New York, New York (Socony Company) exchanged its stock for all of the Magnolia Petroleum Company stock in December of 1925.

In 1964, the tug was acquired by the McAllister Brothers Towing Company of New York, New York. Where she was renamed as the G.M. McAllister.

However, the McAllister Brothers Towing Company later renamed the tug as the Doug McAllister.

In the 1970's, she was acquired by Captain Arthur Fournier of the Penobscot Bay Towing Company of Belfast, Maine. Where the tug retained her name.

In 1989, she was acquired by Passamaquoddy Towing Services of Eastport, Maine. Where she was renamed as the Nickpatrick.

In 1996, the tug sank at a pier in Eastport, Maine during a storm. The tug was raised, beached, and scrapped. Powered by single General Motors 12-278A diesel electric engine. She was a single screw tug, rated at 1,000 horsepower.
(Captain Brian Fournier)