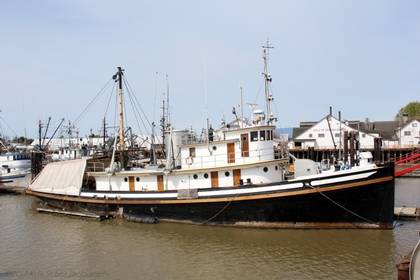 Built in 1944, by Northeastern Shipbuilding of Quincy, Massachusetts (hull #LT465) as the LT-465 for the United States Army.

In 1946, the tug was acquired by the Mobile Wrecking and Towing Company of Mobile, Alabama, where she was renamed as the Ernest F. Ladd.

In 1951, she was acquired by Island Tug and Barge Limited of Vancouver, British Columbia. Where the tug was renamed as the Lloyd B. Gore.

In 1960, Island Tug and Barge Limited became a subsidy of McAllister Towing Limited Montreal of Montreal.

In 1971, the tug was acquired by private owners. She was then arrested by the Canadian Government in 1988 after illegally bringing 22 tons of marijuana into Canada from Thailand.