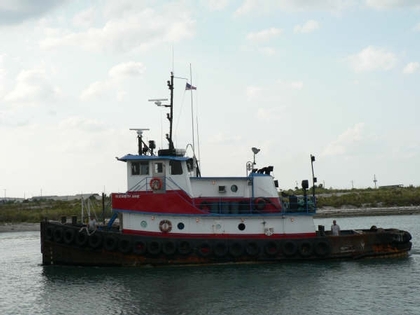 Pictured as: the Elizabeth Anne (McCulley Marine) Photo by: Unknown

Built in 1973, by the Lemont Shipbuilding and Repair Company (hull #1004) as the Muskegon for the Bultema Dock and Dredge Company of Muskegon, Michigan.

In 1981, she was acquired by the Canonie Transportation Company of Muskegon, Michigan. Where the tug retained her name.

In 1987, the tug was acquired by Andrie Incorporated of Muskegon, Michigan. Where she retained her name.

In 1994, she was acquired by the King Company of Holland, Michigan. Where the tug retained her name.

In 2005, she was acquired McCulley Marine Services of Fort Pierce, Florida. Where the tug was renamed as the Elizabeth Anne.

Powered by two Caterpillar 379 diesel engines. With a reduction gear ratio of 4.34:1. She is a twin screw tug, rated at 1,200 horsepower.

The towing equipment consists of a single drum, hydraulic, SMATCO 44-HATS-100 towing winch. Rated at 50 horsepower, driven by an electric motor. Outfitted with 1600(ft) 1.25(in) towing cable. As well as two "facing" winches mounted on the bow.

Her electrical service is provided by two 90kW generators. Driven by two powered by two Caterpillar D330 diesel engines. The tug's capacities are 25,000 gallons of fuel, and 4,000 gallons of potable water.
(Birk Thomas)


Back to KING COMPANY INCORPORATED