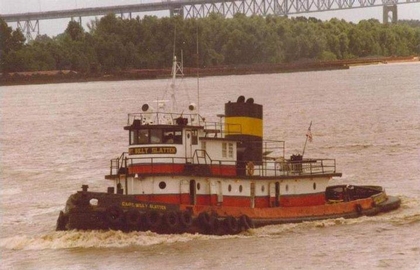 Built in 1885, by the Neafie Levy Shipbuilding Company of Philadelphia, Pennsylvania (hull #773) as the Bolivar.

The tug was later sold. Where she was renamed as the Bayou Orleans. And then, as the Point Comfort.

She was eventually acquired by the Bisso Towboat Company of of Luling, Louisiana. Where the tug was renamed as the Cappy Bisso. And, then as the Capt. Billy Slatten.

In 1999, the tug was acquired by Crowley Marine Services Incorporated of San Francisco, California. Where the tug was renamed as the San Juan.

In 2005, the tug sank in the Dominican Republic. She was a twin screw tug, rated at 3,600 horsepower.
(Jose Luis Villafane, Wallace Rosser)