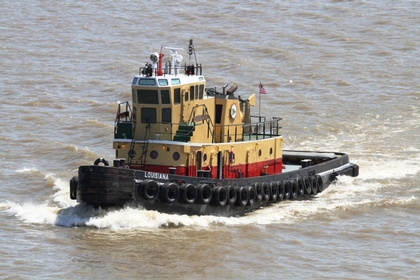 Pictured as: the Louisiana (Crescent Towing and Salvage) Photo by: Captain Ted

In 1985, the tug was acquired by the Crescent Towing and Salvage Company Incorporated of New Orleans, Louisiana. Where the tug was renamed as the Elizabeth Smith.

In 2004, the tug was rebuilt and repowered. The project included a complete redesign of the vessel. Including the wheelhouse, with improved window placement, and low profile stacks for maximum visibility.

Her stern section, and propulsion system, were removed, and replaced. Her existing single, EMD 12-567C diesel engine was removed. And, replaced with two, eight cylinder, General Electric 228, diesel engines. With Reintjes reduction gears, at a ratio of 4:1. Turning two, 85(in) Bollinger stainless steel, fixed pitch propellers. Mounted in 86(in) type 37 kort nozzles. With stainless steel inner rings. And, a maximum range of forty five degrees for increased maneuverability. She is a twin screw tug rated at 4,200 horsepower.

In 2008, the Crescent Towing and Salvage Company renamed the tug as the Louisiana.
(Paul Strubeck)


Back to PENNSYLVANIA RAILROAD COMPANY INCORPORATED