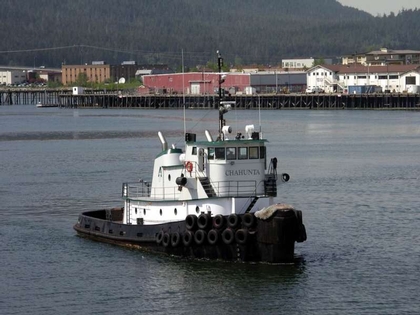 Pictured as: the Chahunta. (Amak Towing Company) Photo by: Foggy

Built in 1977, by the Orange Shipbuilding Company of Orange, Texas (hull #207) as the Gulf Titan for Gulf Mississippi Marine of Houston, Texas.

In 1988, the tug was acquired by the Pacific Towboat Company of San Diego, California. Where she was renamed as the Atlantic Mariner.

In 1993, she was acquired by the Amak Towing Company Incorporated of Ketchikan, Alaska. Where the tug was renamed as the Chahunta.

Powered by two, Caterpillar 3516 diesel engines. With Reintjes reduction gears, at a ratio of 5.8:1. Turning two, 100(in) fixed pitch, stainless steel propellers. For a rated 3,000 horsepower.

Her electrical service is provided by two, 90kW generator sets. Driven by two, Caterpillar 3304B diesel engines. The tug's capacities are 56,000 gallons of fuel, and 4,200 gallons of water.