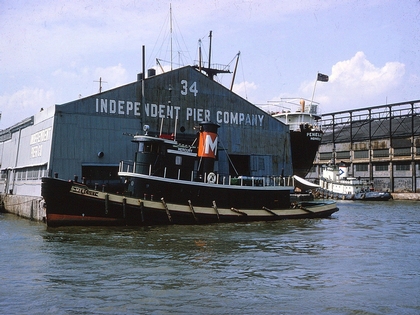 Pictured as: the Mercury (Meyle Towing) Photo by: Dave Boone

Built in 1898 by Neafie & Levy Ship and Engine Building Company of Philadelphia, Pennsylvania as the DeWitt C. Ivins for the Moran Towing Company of New York, New York.

In 1915, the tug was acquired by the Standard Transportation Company of New York, New York. Where she was renamed as the S.T. Co. No. 7.

In 1917, she was transferred to the the Socony Vacuum Oil Company of New York, New York. Where the tug was renamed as the Socony 7.

In 1943, the tug was acquired by the Independent Pier Company of Philadelphia. Where she was renamed as the Mercury.

In 1980 the tug was acquired by Compass Marine Incorporated of Philadelphia, Pennsylvania, where she retained her name.

In 2001, she was scrapped in Boston, Massachusetts. She was a single screw tug, rated at 1,700 horsepower.
(Dave Boone, Jeff Schurr)