In 1971, the tug was acquired by the Moran Towing Company of New York, New York. Where she was renamed as the Maureen Moran.

In 2010, the tug was placed out of service. And in 2012, she was reported as sold to undisclosed interests. She was a single screw tug, rated at 2,150 horsepower. 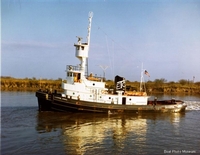