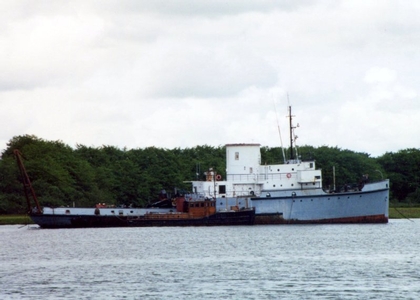 Pictured as: the Northern Retriever Photo by: George Schneider

Built in 1943, by Avondale Marine Ways (hull #41) as the Libby Island for the United States Navy.

In 1943, the Moran Towing Company of New York, New York was contracted to man and operate the tug for the United States Navy.

In 1946, she was returned to the United States Navy.

In 1971, the tug was acquired by Alpac Underseas Incorporated of Seattle, Washington. Where she was renamed as the Northern Retriever.

She was eventually acquired by an individual named Dennis Matheson, and in 2008 was seized by the City of Hoquiam, Washington as a derelict vessel. The tug was then scrapped at Seattle, Washington in 2009.

She was single screw, rated at 2,250 horsepower.