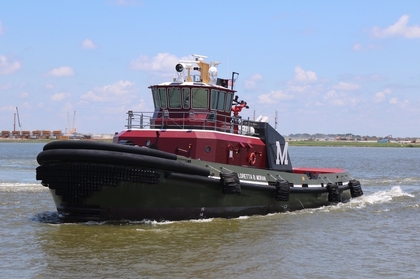 Built in 2010, by Washburn and Doughty Associates of East Boothbay, Maine (hull #97) as the Loretta B. Moran for the Moran Towing Corporation of New Canaan, Connecticut.

Her deck machinery consists of a Markey, 100 horsepower, multi speed, hawser winch. Outfitted with 9.5(in) soft line mounted on her bow. And, a capstan/winch mounted on her stern. The tug's firefighting gear consist of two FFS monitors. Each capable of 5,400 Gallons Per Minute. Driven by two, 800 horsepower, Caterpillar C18 diesel engines. As well as a deluge system, that also delivers 1,000 Gallons Per Minute.