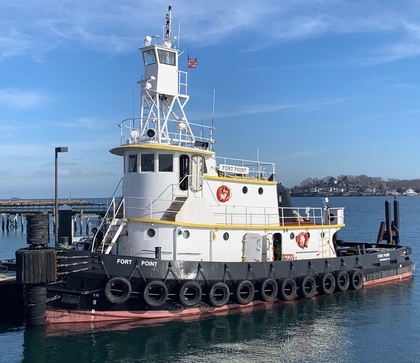 In 2003, the tug was acquired by Hunt Marine Incorporated of Narragansett, Rhode Island. Where she was renamed as the Patrick J. Hunt. And, was outfitted with an upper wheelhouse.

In 2015, she was acquired by Riverside and Pickering Tug Logistics of Portsmouth, New Hampshire. Where the tug was renamed as the Fort Point.

In 2019, the tug was acquired by U.S. Northeast Dredge and Marine Incorporated of Hampstead, New Hampshire. Where the tug retained her name.

In 2020, she was leased to Atlantic Coast Tug and Marine LLC. of Hampstead, New Hampshire. Where the tug retained her name.

The towing equipment consists of a single drum towing winch.


Back to RIVERSIDE AND PICKERING TUG LOGISTICS LLC.