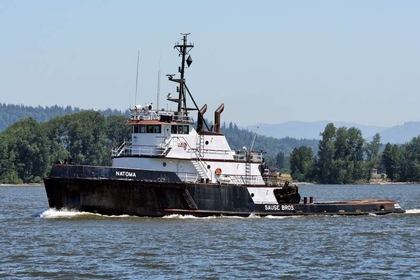 Pictured as: the Natoma (Sause Brothers) Photo by: Phil Gilston

Built in 1976, by Service Machine and Shipbuilding Company of Amelia, Louisiana (hull #116) as the Capt. John for the Fonteneau and Smith Boat Company of Morgan City, Louisiana.

In 1978, the Fonteneau and Smith Boat Company was acquired by Newpark Marine Services Incorporated of The Woodlands, Texas. Where the tug was renamed as the Newpark Sun God.

In 1983, she was acquired by the Gulf Fleet Marine Corporation, of Houston, Texas. Where the tug was renamed as the Gulf Lightning.

In 1991, the tug was acquired by the Sause Brothers Ocean Towing Company of Portland, Oregon. Where she was renamed as the Natoma.

Rebuilt in 1991, at Southern Oregon Marine Incorporated of Coos Bay, Oregon. The shipyard is a division of the Sause Brothers Ocean Towing Company of Portland, Oregon. She is powered by two EMD 16-645-E5 diesel engines. With Reintjes WAV 3400 reduction gears, at a ratio 5.05:1. Turning two, four bladed, 138(in) by 94(in), right and left, inboard turning, fixed pitch, propellers. For a rated 5,700 horsepower.