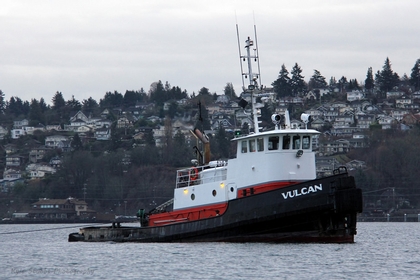 During World War II, the vessel was operated as a towing vessel under the management of the United States Army. Where the tug retained her name.

In 1965, the tug was acquired by the Dunlap Towing Company of La Conner, Washington. Where she retained her name.

In 1977, the the Dunlap Towing Company reconfigured the tug's bulwarks, and superstructure.

Powered by a single, Caterpillar 3508 diesel engine. With a Caterpillar reduction gear, at a ratio of 5.88:1. Turning a single, 61(in) by 61(in) fixed pitch propeller. She is a single screw tug, rated 705 horsepower.

Her electrical service is provided by one 30kW, Delco generator set. The tug's capacities are 5,000 gallons of fuel.

The towing gear consists of a single drum, Markey towing winch. oOutfitted with 1,400(ft) of 1 1/8(in) towing cable.