Built in 2010, by Washburn and Doughty Associates of East Boothbay, Maine (hull #98) as the ATB Mary Ann Moran for the Moran Towing Corporation of New Canaan, Connecticut.

Named for the wife of the ConAgra Grain Company executive Gary Redmann. The unit was constructed for service on a charter to ConAgra grain products, between New Orleans, Louisiana and Puerto Rico. A charter that was being serviced by a conventional tug and barge unit. However, the use of an ATB was found to be more economical with regards to time underway and fuel efficiency.

Fitted with and INTERcon C coupler system. The tug is certified ABS A1 Towing Service and AMS, with an international load line. The tug also complies with applicable SOLAS regulations. And is constructed of ABS Grade A Steel.

She is "married" to a 400(ft), 27,000 DWT dry bulk barge, the Virginia. Which was constructed in 1982, by Galveston Shipbuilding of Galveston, Texas. The barge was converted at Gulf Marine Repair of Tampa, Florida for service as an articulated barge for the Moran Towing Corporation.
(Robert P. Hill) 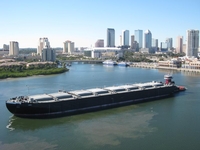