Built in 1961, by the Dravo Corporation of Wilmington, Delaware (hull #4121) as the Margaret Moran for the Moran Towing Company of New York, New York.

In 1962, the tug was chartered by the McAllister Brothers Towing Company of New York, New York. Where she was renamed the Brian A. McAllister.

In 1963, the McAllister Brothers Towing Company acquired the tug. Where she retained her name. Named for the Chairman, and President of McAllister Towing and Transportation, Captain Brian A. McAllister.

In 2013, the tug was phased out of active service. And, "laid up" at McAllister Towing and Transportation's yard at Mariner's Harbor in Staten Island, New York.

In 2017, she was scrapped at Portland, Maine. The tug was single screw, outfitted with a kort nozzle, and a flanking rudders. For a rated 2,000 horsepower.


Pictured as: the Brian A. McAllister (McAllister Towing and Transportation) Photo by: John Skelson 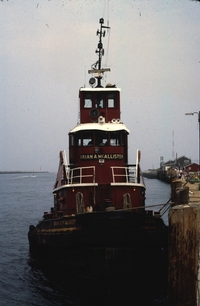