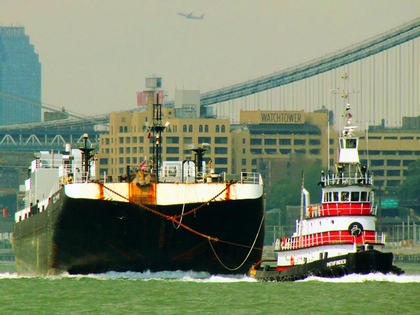 Built in 1972, by Main Iron Works Incorporated of Houma, Louisiana (hull #264) as the Pathfinder for the Interstate Oil Transportation Company of Philadelphia, Pennsylvania.

In 1994, the tug was acquired by the Dahl Tug and Barge Company of Seattle, Washington. Where she retained her name.

In 1998, she was acquired by the Milton Point Investments Company of Rye, New York. Where the tug retained her name.

In 2007, the tug was acquired by Dana Marine Services Incorporated of Theodore, Alabama. Where she retained her name.

In 2007, she was acquired by the Norfolk Tug Company of Norfolk, Virginia. Where the tug retained her name.

In 2007, the Norfolk Tug Company rebuilt the at Lyon Shipyard in Norfolk, Virginia. Where the tug underwent significant renovations including steel, internal wiring, stern fendering. This work included interior improvements, and rebuilding. The tug's main engines were torn down, and re manufactured.

In 2008, she was refitted two new fuel efficient, John Deer/Kohler generators. And her Lufkin reduction gears were rebuilt. Her shafts, and rudder where reworked. This also included the addition of an improved upper wheelhouse house that provided for 41(ft) height of eye.

The towing equipment consists of a single drum, Smatco towing winch. And a Smatco capstan fitted on her stern. With two, hydraulic push winches mounted on her bow. Outfitted with 1.75(in) towing wire.
(Captain Eric Takakjian, Kyle Stubbs)


Back to DAHL TUG AND BARGE INCORPORATED