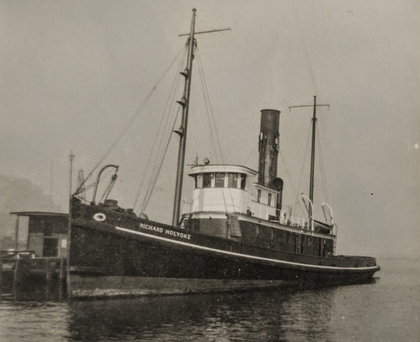 Pictured as: the Richard Holyoke (Bellingham Tug & Barge) Photo from the collection of Kyle Stubbs

In 1891, the Washington Timber Company entered a partnership to provide tugboat service in the Puget Sound region. And provided the tug as a part of creating the Puget Sound Tugboat Company of Port Townsend, Washington. Where the tug retained her name.

In 1916, she was acquired by the Skinner and Eddy Corporation of Seattle, Washington. Where the tug retained her name.

In 1923, the tug was acquired by the Bellingham Tug and Barge Company of Bellingham, Washington. Where she retained her name.

In 1940, the tug was acquired by the Metal Conservation Corporation of Seattle, Washington. Where she was intended for conversion into a diesel-powered salvage vessel. Those plans fell through, and she was abandoned and likely scuttled in Lake Union.

She was a single-screw, steam tugboat with 344 horsepower.


Back to PUGET SOUND TUGBOAT COMPANY