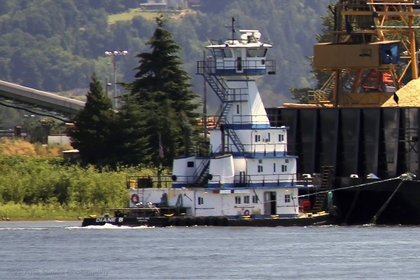 Pictured as: the Diane B. (Bernert Barge Lines) Photo by: Kyle Stubbs

Built in 1979, by the Greenville Shipbuilding Corporation at Greeville, Mississippi as the Jack for the Valley Towing Company of Houston, Texas.

The tug was later acquired by Marin Tug and Barge Incorporated of San Rafael, California. Where she was renamed as the Marin Twilight.

In 2001, she was acquired by the Foss Maritime Company of Seattle, Washington. Where the tug was renamed as the Twilight.

In 2007, the tug was transferred to Foss subsidiary, AmNav Maritime Services of Oakland, California. Where she retained her name.

In 2013, she was acquired by Bernert Barge Lines Incorporated of Oregon City, Oregon. Where the tug was renamed as the Diane B.

She is a twin-screw towboat.
(Kyle Stubbs)