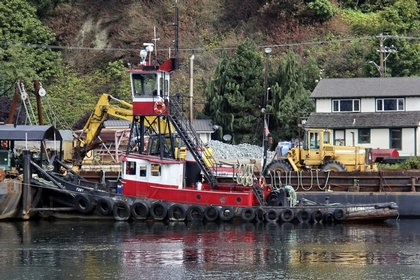 Pictured as: the Fury (Walrath Marine) Photo by: Kyle Stubbs

Built in 1945 by Bellingham Shipyards at Bellingham, Washington as the YTL-587 for the United States Navy.

In 1972, the tug was acquired by the Contractors and Mariners Equipment Company of Tacoma, Washington. Where she was renamed as the Fury.

Eventually, the tug was acquired by the Jay Towing Company of Tacoma, Washington. Where she was renamed as the Fury.

In 2018, the assets of Jay Towing Company were sold to the Walrath family of Tacoma, Washington and reorganized as Walrath Marine, LLC. Where the tug retained her name.

Her powerplant consists of a single CAT 379 diesel with 4:1 CAT reduction gear, turning a single 68" x 44" propellor. for a rated 525 horsepower.