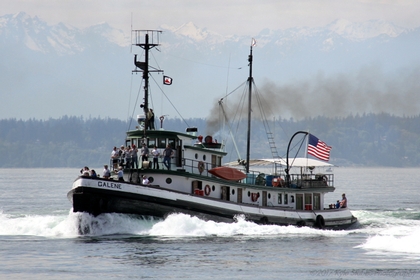 Pictured as: the Galene (Victor Suttmeier) Photo by: Kyle Stubbs

Built in 1943 by Northeast Shipbuilding at Quincy, Massachusetts as the LT-464 for the United States Army.

In 1955, the tug was acquired by Alaska Freight Lines Incorporated of Seattle, Washington. Where she was renamed as the Richard.

In 1975, she was acquired by Northland Services Incorporated of Seattle, Washington. Where the tug was renamed as the Polar Sea.

In 2000, the tug was acquired by an individual from Beaverton, Oregon. Where she was renamed as the Galene. She has since passed through the hands of other private owners and is now used as a liveaboard in Seattle, Washington.

Her powerplant consists of a single Superior direct reversing diesel turning a single propellor. For a rated 1,200 horsepower.