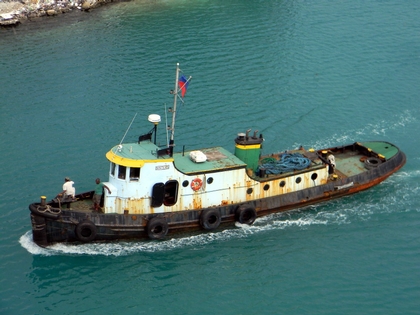 Pictured as: the Sisters (Ocean Barge and Tug) Photo by: Viktor

Built in 1874, John H. Dialogue and Son Incorporated of Camden, New Jersey (hull #175) as the Rebecca for Henry E. Strathmann of Philadelphia, Pennsylvania.

In 1961, the tug was acquired by the Bernstein and Jacobson Salvage Company of Portland, Maine. Where she retained her name.

In 1968, she was acquired by Cianbro Equipment Incorporated of Pittsfield, Maine. Where the tug was renamed as the Fannie J.

In 2012, she was acquired by Hartley Marine Services Incorporated of East Boothbay, Maine. Where the tug retained her name.

In 2012, the tug was acquired by Ocean Barges and Tug Logistics. A subsidiary of the Transzone Shipping Company of Port Au Prince, Haiti. Where the tug retained was renamed as the Sisters.

Originally powered by a single, coal-fired, steam engine. The tug was originally rated at 125 horsepower. In 1978, she was re powered with a single, Detroit Diesel V-12 diesel engine. Turning a single, 70(in), stainless steel, fixed pitch propeller. For a rated 450 horsepower.
(Captain Bill VanVoorhis)


Back to BERNSTEIN AND JACOBSON SALVAGE COMPANY INCORPORATED