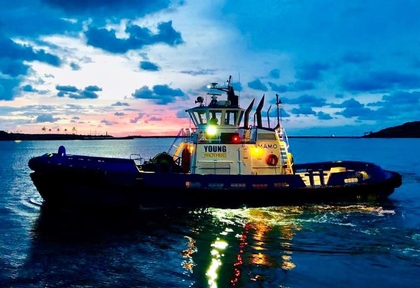 In 1900, William and Herb Young, joined later by their younger brother Jack, began operation of a small launch and maritime service company in Honolulu, Hawaii. Their operations soon grew through receiving contracts from the Immigration and Customs Service and the Hawaiian Dregding Company. By the 1920's, the company had become an established component of inter-island trade, especially with the rise of the Hawaiian pineapple industry.

In 1951, the company was merged with the maritime operations of the Dillingham family's Oahu Railway and Land Company (OR&L), retaining the Young Brothers name. Then, in 1961, the OR&L and the Hawaiian Dredging Company were consolidated as the Dillingham Corporation, with Young Brothers, Limited operated as a common cargo carrier and the Hawaiian Tug and Barge Company established to handle tugboat operations.

In 1986, the Dillingham Corporation shed its maritime assets in favor of real estate investment, with the assets of Hawaiian Tug and Barge and Young Brothers being acquired by Hawaiian Electric Industries Incorporated (HEI) of Honolulu, Hawaii.