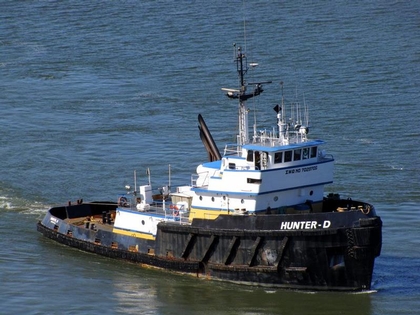 Built in 1970, by Albina Engine and Machine Works of Portland, Oregon (hull #414) as the Malanae for the Hawaiian Tug and Barge Company of Honolulu, Hawaii.

In 1988, the tug was transferred to Hawaiian Electric Industries subsidiary, the Young Brothers Company of Honolulu, Hawaii.

In 1999, Saltchuk Resources Incorporated of Seattle, Washington, acquired the maritime assets of Hawaiian Electric Industries, and the Hawaiian Tug and Barge Company, as well as the Young Brothers Company.

In 1999, the tug was acquired by the Dahl Tug and Barge Company Incorporated of Seattle, Washington. Where she was renamed as the Hunter D.

In 2010, she was acquired by Harley Marine Services Incorporated of Seattle, Washington. Where the tug retained her name.

In 2019, the tug was "laid up" at Philadelphia, Pennsylvania.

In 2020, Harley Marine Services Incorporated became the Centerline Logistics Corporation of Seattle, Washington. Where the tug retained her name.

Her electrical service is provided by two, 75kW generator sets. Driven by two, Detroit Diesel 6-71 diesel engines. The tug's capacities are 73,000 gallons of fuel, 5,823 gallons of water, 1,860 gallons of lube oil, and 300 gallons of hydraulic oil.

The towing equipment consists of a double drum, Markey, towing winch. Outfitted with 2,400(ft) of 2(in) towing wire.
(Kyle Stubbs)


Back to YOUNG BROTHERS COMPANY INCORPORATED