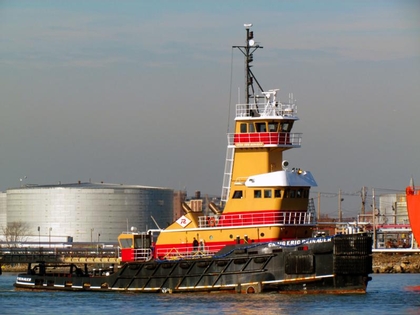 Built in 1979, by American Gulf Shipyard Incorporated of LaRose, Louisiana (hull #142) as the Hercules. However, the project was not immediately completed. And, the yard only constructed the hull.

In 1981, the hull was acquired by Tidewater Marine Incorporated of New Orleans, Louisiana. Where the tug was renamed as El Bronco Grande.

In 1999, the tug was "laid up," and placed out of service at Bollinger Shipyard of New Orleans, Louisiana.

In 2006, she was acquired by the Reinauer Transportation Companies of Staten Island, New York. Where the tug was renamed as the Craig Eric Reinauer.

The tug underwent an extensive refit at Bollinger Shipyards of Morgan City, Louisiana. Which included the removal of her two, original Burnmeister and Wayne 14V23LU diesel engines. The engines were completely rebuilt for a rated 4,080 horsepower.

On her exterior all fills, vents, sounds, and hatches where cropped out and replaced. As well as the tow winch, and anchor windlass. In her wheelhouse the, electronics, radars, navigation lights, mast, and radios where removed. The controllable pitch propellers, couplings, and shafts where overhauled by Bollinger Quick Repair. Her rub rails under the main deck where removed. The tug's ten Fernstrum coolers where also overhauled. Her hull was blasted down to bare steel, and a coat of primer was applied along with bottom paint. All of her ballast, voids, potable water, and sewage tanks where also blasted down to bare steel.

An upper wheelhouse designed by Robert P. Hill of Ocean Tug and Barge engineering of Milford, Massachusetts was added. The upper house features a 48'(ft) height of eye, for an air draft of 79'(ft).

She received two, new 125kW John Deere generator sets for the tug's electrical service. Her deck appendages, and containment where replaced with new stainless steel, and stainless piping. Her main deck bulwarks where cut down and replaced. Her towing machine was removed, and replaced by a refurbished Almon Johnson towing winch. As well as a refurbished bow capstan. The tug's steering system was replaced with separate controls, and new stainless steel piping. She also received new navigational equipment, including a new light panel, and a Simrad Electronic suite.

In 2008, the tug was converted to an Articulated Tug and Barge. With the installation an INTERcon series "C" coupler system. Engineering of coupler system installation was performed by Robert P. Hill of Ocean Tug and Barge Engineering of Milford, Massachusetts. And the entirety of the work on the project was done at the Reinauer Transportation Company's SENESCO Shipyard facility in North Kingstown, Rhode Island.

The project also included the removal of her original Burmeister Wain diesel engines. As well as, her variable pitch propellers, and kort nozzles. The tug was repowered with standard, fixed pitch, propellers. And two, rebuilt twelve cylinder, EMD 12-645E7C turbo, diesel engines. With Reintjes WAV-3450 reduction gears, at a ratio of 5:1. For a rated 4,000 horsepower.

Her towing winch was removed, and replaced by a towing bitt for emergency towing operations. A third 99kW, John Deere generator set was installed to power a JonRie capstan mounted on the stern. As well as the INTERcon coupler system.

In 2018, Andrie Incorporated of Muskegon, Michigan was contracted to man, and manage the unit.
(Captain John Kauffman, Ocean Tug and Barge Engineering) 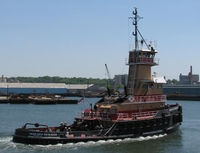 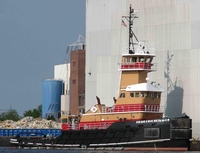 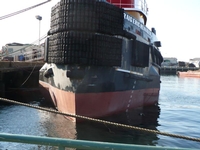 
Back to U.S. OIL INCORPORATED