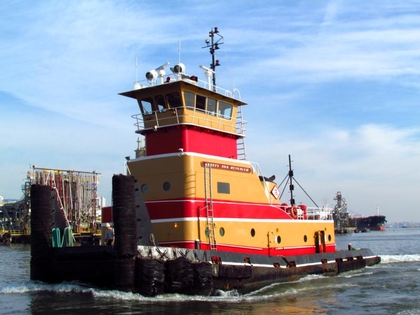 Built in 1962, by Main Iron Works Incorporated of Houma, Louisiana (hull #114) as the Interstate Transporter for the Interstate Oil Transportation Company of Philadelphia, Pennsylvania.

She was the first tug to be constructed by Main Iron Works for the Interstate Oil Transportation Company.

In 1982, the tug was chartered to the Moran Towing Corporation of Charleston, South Carolina. Where she was renamed as the Transporter. The tug was utilized to moved scrap barges in, and around Charleston, and along the Intercoastal Waterway.

In 1987, the SONAT Marine Company was acquired by the the Maritrans Operating Partnership of Tampa, Florida. Maritrans was formed by group of managers from the SONAT Marine Company. Who offered to form a partnership to raise the funds necessary to purchase the company. These eleven partners included some individuals who had worked for the Interstate Oil Transportation Company since the 1950's.

In 1989, she was returned to the Martians Operating Partnership of Tampa, Florida. Where the tug was renamed as the Interstate Transporter.

In 1998, the tug was acquired by the Reinauer Transportation Companies of Staten Island, New York. Where she was renamed as the Kristy Ann Reinauer.

In 2013, she was "laid up" at the Reinauer Transportation Company's yard in Staten Island, New York.