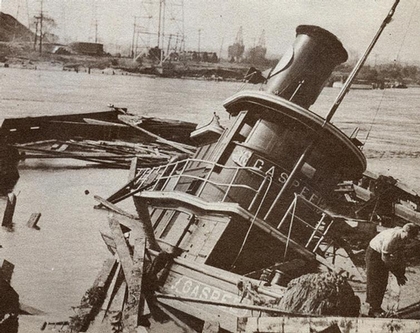 In 1894, she was acquired by the Providence Steamboat Company of Providence, Rhode Island where she was renamed as the Gaspee .

On the 21st of September 1938, the tug was stranded in a hurricane and wrecked on the India Point rail road bridge in Providence. The Crew evacuated the tug aboard a small dory, while rowing to safety they saved a small girl who was clinging to some wreckage. All made it to shore safely.

In 2001, the wreckage of the Gaspee was removed when the bridge was demolished by Army Corp of Engineers.

She was a single screw tug powered by a steam engine rated at 300 horsepower.
(Tom Rush, David Wright)