Built in 1940, by Russell Erie Basin Shipyard of Brooklyn, New York for an undisclosed party.

In 1940, the unfinished hull was acquired by the Providence Steamboat Company of Providence, Rhode Island. Where she was named as the Gaspee.

She was the second tug to bare the name, the first tug Gaspee. Was wrecked during the hurricane of 1938.

In 2004, the tug was acquired by John C. Hadfield of Providence, Rhode Island. Where she retained her name.

In 2014, she was acquired by Captain Kevin Hunt of Ocean State Tugs and Barges Incorporated of Warwick, Rhode Island. Where the tug retained her name.

In 2014, she was acquired by Acushnet Marine Incorporated of Boston, Massachusetts. Where the tug retained her name.

In 2015, she went out of documentation, and was "laid up" at East Boston, Massachusetts.

In 2020, the tug was scrapped at East Boston, Massachusetts. 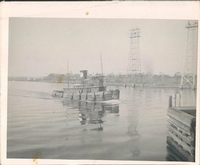 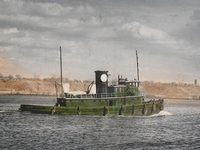 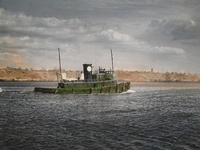