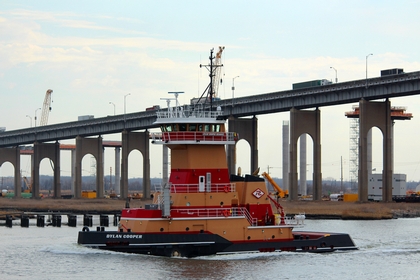 Built in 2015, by SENESCO Marine Incorporated of North Kingston, Rhode Island (hull #211) as the Dylan Cooper for the Reinauer Transportation Companies of Staten Island, New York.

She was the third Twins class FACETTUG tug designed by Robert Hill of Ocean Tug and Barge for the Reinauer Transportation Companies.

The tug's tower is constructed of steel, and not of aluminum as were the early, non SOLAS compliant, variations of the FACETTUG design. Her SOLAS rating includes additional equipment such as an additional emergency generator, additional insulation and electronics, installation of an engine order telegraph in the wheelhouse, installation of GMDSS and other additional wheelhouse electronics. A rescue boat and davit on the boat deck, and additional firefighting and life saving equipment.

The tug is outfitted with an INTERcon Series C coupler system. With two, 34(in) diameter pins. Her electrical power is supplied by three, 99kW, John Deere generators, with Marathon electric ends. One generator is dedicated to the INTERcon coupler system. Her capacities are 87,440 gallons of fuel, 1,664 gallons of hydraulic oil, 5,811 gallons of lube oil, and 17,171 gallons of water.