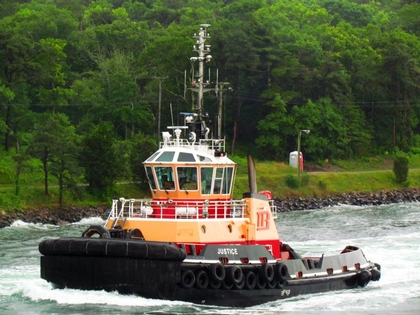 Pictured as: the Justice (Boston Towing and Transportation) Photo by: Birk Thomas

Designed by Naval Architect Robert Allan of Vancouver, British Columbia. She is a RAmparts 3000 class tug with a sponson type variation on the original design.

The tug was designed to fulfill the Boston Towing and Transportation Company's contract with Neptune LNG Company. An affiliate of the Suez LNG North America Company. And, was based out of Boston, Massachusetts.

In 2012, the contract was ended. And, the tug assumed ship assist duties in and around Boston, Massachusetts. As well as, the Cape Cod Canal, and Buzzards Bay in Massachusetts.

The z drives on the Justice where the second application of this type for Rolls Royce in the United States. The controllable pitch drives optimize bollard pull, fuel efficiency, and vessel speed. Her FiFi class One fire pump,s are driven off the main engines. This design was intended to conserve weight, and cost. By eliminating the fire pump engines found on other FiFi class One vessels. The fire pump feeds her two, Inmar/FFS/Nyjus, fire monitors. With a 425 (ft) cannon range, rated at 10,500 Gallons Per Minute.

Her towing gear consists of a single drum, Markey VFD, DEPC-52, ship handling winch mounted on the bow. And a JonRie InterTech 512, single drum, towing winch. Outfitted with 2,500(ft) of 2.25(in) towing wire, mounted on her stern.

The tug also features radiantly heated decks, bow bulwark caps. The tug is capable of self loading up to two containers for cargo operations. Using an Effer, hydraulic deck crane. With a Safe Working Load of 10 tons at range of 25(ft). 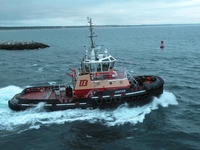 Pictured as: the Justice (Boston Towing and Transportation) Photo by: Captain Chris Grimadli 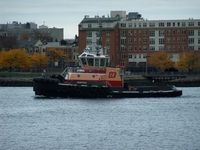 Pictured as: the Justice (Boston Towing and Transportation) Photo by: Tom Rush 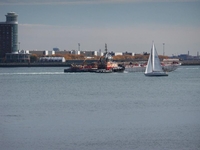